Me and Hand grenades 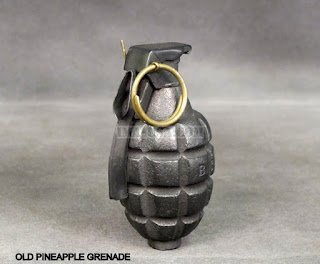 When I was in Infantry basic training in 1969, I was taught how to use a hand grenade. It was the older style grenade that looks like a pineapple and weighs a couple of pounds. Instructions were:

Straighten-out the cotter-pin (which will allow the pin to be pulled).

While holding the lever, pull the pin out.

Lob the grenade over your head towards where you want it to go (about 25 or 30 feet away).

Hit the deck! (Lie down quickly and keep your head down).

Big ka-boom and it’s all over – easy shmeezy. 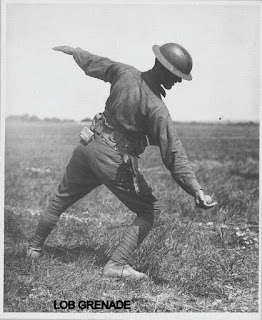 When I was finished basic training and Infantry School in 1970, I was sent to my Regiment - 1st Battalion, Princes Patricia’s Canadian Light Infantry in Calgary, Alberta “Currey Barracks.”

As soon as I got there, we all left for Wainwright, Alberta for a three day “live firing” exercise: a pretend battle - using real ammunition – not blank bullets or flash-bangs: which are fake grenades. The real deal (and deadly).

It had everything, camping-out, digging trenches, tanks, artillery, jet aircraft and riding around in armored personnel carriers and helicopters – very exciting.

It was a Gong Show!

During a staged attack, my section (9 Guys) had to assault an enemy position (no one there, but we had to pretend there was). Two guys with automatic weapons (machine guns) went off on the right to lay down suppression fire on the enemy position. Which means - they fire their machine guns at the fake enemy position to make them keep their heads down. Then the rest of us, about 5 feet apart, advance on the enemy position while firing our semi-automatic rifles. The two guys on the right are supposed to stop shooting when we get close to the enemy. NOT! Live ammunition, remember! As we got closer, live rounds were kicking-up dust on the ground three feet in front of me!
The Jets were constantly doing practice strafing runs on us. We couldn’t hear or see them until they were right on top of us going like a bat out of hell - very close – within 100 or 200 feet and incredibly noisy! One time, we had dug trenches on the top edge of a 300 foot hill. The jets were strafing us – coming straight at us, and then climbing just a little, to go over us – loud as hell. I was getting angry because I was trying to get some sleep – but the damn jets were making too much noise. Just then, I managed to see one coming. . . while swearing – I threw a rock at the jet as it passed and damn near hit it. Then I noticed that everyone was looking at me strangely. So I looked around and saw something I’d never see before: a General – not just one, but four Generals – all looking at me! I didn’t say or do anything – just turned around and looked to my front. Thinking that this whole thing had been staged to show-off to the Generals. Well, I did my part!
How to easily stay-up all night: go for night rides in a big helicopter with thirty guys, being picked-up and dropped-off at different battle positions until sun rise: which are very beautiful on the Alberta Prairie.
Sleep: during this three day exercise, there was no time-off for sleeping. We slept when we could. They were testing our stamina, I guess. The jets would not let me sleep. But I did manage to get at least one hour of sleep while riding in an armored personnel carrier (APC) going cross-country, sitting on a small stool, and holding onto a strap from the ceiling.

Artillery: there was a big artillery live firing demonstration – different types of guns using different kinds of shells and there are lots of different kinds. This was one of the scariest things I’d ever seen. Artillery killed most of the Soldiers in WW1.

Ralph’s hand grenade: two of our guys were supposed to blow-up an enemy trench with grenades. They’re supposed to walk up to the trench, throw in their grenades and run away. They did this – only Ralph forgot to straighten-out the cotter-pin. So the other guy pulled his pin, threw his grenade into the trench and ran away. Ralph is still standing there, trying to pull the pin out. It won’t come-out, of course. (We only have about five seconds here!) We all start yelling like crazy – Ralph throws the grenade in the trench without pulling the pin – dives away – and the first grenade goes off while Ralph is still in the air. He was unhurt, but our Corporals sure gave him what-for. “You look like a penguin trying to f*ck a football” comes to mind. (Ralph was a major idiot – I almost got into a fight with him once – on an airplane). Now, we couldn’t leave a live grenade in that trench. So along comes our Lieutenant, the oldest, and most calm Lieutenant ever: He had “risen through the ranks” to become a Regimental Sergeant Major (which as close to being a God that mortals can get). Then became an officer to make more money. He had a “satchel charge” with him – which is a bomb in a small pack. He calmly walked up to that trench, placed his bomb in that trench and calmly walked away. We were all about one hundred feet away when it blew-up – fairly impressive – and there was no more trench there. That was one brave Lieutenant. 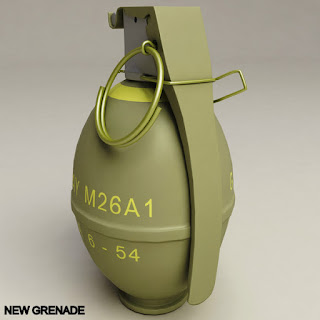 My Grenade: we were doing another attack on a enemy position – only this time I had to throw a grenade at a certain point in the exercise. So I was given a grenade, with a stern warning about "straighten-out the cotter-pin" (this was after the Ralph CF event). Now this grenade was very different: it was smooth and weighed about half a pound – about the same as a baseball. So the time comes for me to do my stuff. I pulled the pin and lobbed that grenade over my head, as I had been trained to do. IT ONLY WENT ABOUT TEN FEET. All I could do was loudly yell, “everyone down!” and bury my face in the ground. It went off with a big bang and a piece of shrapnel glanced off my helmet. There were nine guys very close, but no one got hurt. I was quite shaky, but then, you know what, hit the fan. I had to explain what happened, in this order: my Corporal, my Sergeant, my Lieutenant, and then to the highest of the high: the Colonel of the Regiment. Through all this, I learned that I was supposed to throw this newer type grenade like a baseball. The Colonel gave me another grenade! He told me to throw is as far as I could. I had a good arm – that thing was in the air for about four seconds and went off as soon as it hit the ground. The Colonel said, “very good. Off you go now.” I was somewhat famous for a while because of this incident.
Posted by Dale K. Poulin at 10:23 AM

Dale K. Poulin
We are Angela, Bobby, Catherine, Dale and our little Doggie Miss Ellie Rose Poulin. Hello Everyone! We live in Surrey, British Columbia - Canada's most western Province and a beautiful part of our World.