Flying a Kite with Angela 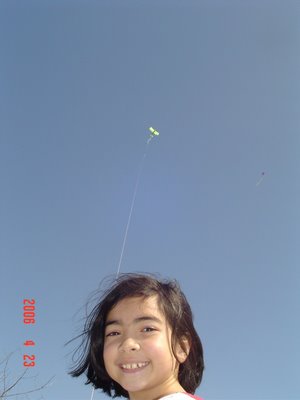 Angela flew her new kite on Sunday out at Crescent Beach. The yellow biplane kite above her head has a five foot wingspan. . . so it's way up there!
Posted by Dale K. Poulin at 8:42 PM 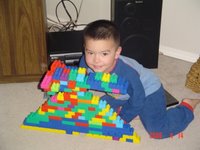 Good job for only 4 years old! I have a feeling that we will be sending Bobby to the University of British Columbia Engineering Department in about 15 years.
Posted by Dale K. Poulin at 6:32 PM

It has been 20 years since I bought my first computer; an ATARI 520ST. Those who knew me at that time thought that I was the least likely person to buy a Personal Computer. Few people had Personal Computers back in 1986. It cost $1,600.00 (quite a lot of money then) to buy. The operating system was on a floppy disk that you had to load at start-up. It had 512 kilobytes of memory - that's 1/2 a megabyte! I could add another 512 kilobytes of memory for only $1,000.00! It had no hard Drive. It had a colour monitor. It was a marvel! My Mom was even afraid to touch it. . . thought it would "take over." I sure learned a lot.

What I didn't realize at that time that PC's were just coming out of Infancy and taking the first Baby Steps; to become Humanity's greatest tool. Every Industry has been changed amazingly.

Remember that we are still essentially at the beginning of the Computer Age. I wonder what will happen in the next 20 years.
Posted by Dale K. Poulin at 8:22 PM 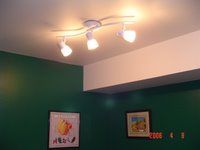 We finally got rid of the two ugly white round "Swedish Ball" light fixtures in our kitchen. I installed two track lights with three flood lights in each one. We can see stuff in our kitchen now - even some things we didn't even know was there!
Posted by Dale K. Poulin at 8:02 PM

Dale K. Poulin
We are Angela, Bobby, Catherine and Dale Poulin. Hello Everyone! We live in Surrey, British Columbia - Canada's most western Province and a beautiful part of our World.