Published our new Website today: www.lottomars.com - created on our new iMac using Sandvox. It's a little simplistic right now, but there's links to our old Site. More stuff to be added soon.
Posted by Dale K. Poulin at 3:53 PM 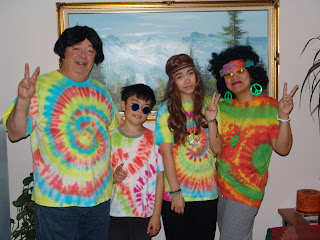 We wish you a very groovy Christmas and a far out New Year.
Posted by Dale K. Poulin at 6:37 PM

My Gold story: There’s gold in “them thar hills!”

In about 1980, my friend Don and I were exploring some old “Turn of the Century” gold mining sites in the Southern Interior of British Columbia. We came across where a small stream had eroded a way through the mines “tailings” area. The stream had exposed different coloured layers of sandy clay dirt. The coloured layers were in multiple layers 2 or 3 inches thick going dowm about 8 feet and the small area looked like a mini Grand Canyon – very cool looking. One of the layers was a bright blue colour – very unique. Don and I were playing with this “blue clay” throwing it at each other and molding shapes with it. It was incredibly sticky, like touching wet plaster. We went home and I mostly forgot all about this blue clay.

About 5 years later I was reading a fiction book about The Comstock Lode in Nevada by Louis L'Amour. In one part of the story, he tells a problem the miners are having with “sticky bright blue mud.” It’s getting stuck to all their equipment, hard to move in or even walk through. Then, just for the hell of it, one of the miners has the blue mud asseyed – it came out 60% gold & 40% silver. In the story, the miners made a fortune with this “sticky blue mud.”

Aha! I then remembered the sticky, bright blue clay that Don and I found years before. A few Months later, I went up in the hills again to the old mining site and grabbed a tupperware container of the blue clay – about a couple of pounds. I took this into Acme Analytical Laboratories on Hastings Street in Vancouver, B.C. and asked them to check for silver and gold. They looked at me like I was a little crazy because they usually get a bunch of rock core samples from mining companies that they have to grind-up to analyze – I told them they should charge me less, because my sample was already ground-up! They wouldn’t go for it and I paid about $100.00 for the testing (Don paid half latter).

The test came back; no silver – but .68 OUNCES PER TON FOR GOLD – which is good!

I next went to Dominion Maps on Granvile Street to find out about the site – to see if it was already claimed. It was interesting going through the maps – each one narrowing in closer and closer. . . until I saw that the whole area was covered in mining claims!

One day I may look into this further as I’ve been told that mining claims can expire. At a little over $1,700 per ounce for gold today. . . “one day” might be sooner that later. But what the heck will I do with gold bearing ore “sticky blue mud/clay” after I’ve found it? Is there a gold refinery around here someplace? We’ll see. . .

Dale K. Poulin
We are Angela, Bobby, Catherine, Dale and our little Doggie Miss Ellie Rose Poulin. Hello Everyone! We live in Surrey, British Columbia - Canada's most western Province and a beautiful part of our World.